Huffington Post: The Jewish Problem With Obama – Part 4 of 5 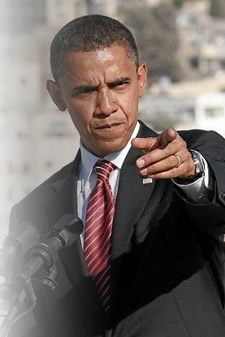 At a certain point, many Jews began to wonder if there was something more behind the Obama administration’s confrontational approach toward Israel than a simple difference of policy. As a result, they began to take a second look at Obama’s past for clues to his present behavior. In particular, they were curious how Chicago’s bare-knuckle politics had shaped Obama’s outlook.

“Maybe Jews and blacks were once the closest of allies in Chicago,” said Joseph Aaron, the liberal editor ofThe Jewish News, Chicago’s largest Jewish newspaper, “but in the years that Obama was being shaped, a lot of young blacks, especially in the Southside neighborhood where Obama lived, harbored animosity toward Jews and Israel.

“Two central issues divided black and Jews in those years,” Aaron continued. “Blacks saw affirmative action as a way to overcome prejudice, while many Jews saw it as a quota system designed to keep them out. It was also a time when Israel, snubbed by many nations, especially in black Africa, chose to forge close ties with the apartheid regime in South Africa. That included selling Israeli arms to South Africa. We never realized the degree to which those links to South Africa hurt black sensitivities.

“Add it all up and you don’t come up with an anti-Semitic Obama. That is not who Obama is. What you do come up with is someone who doesn’t really understand our attachment to Israel or Israel’s importance to Jews as a people, a president who doesn’t have a gut love for Israel like some of his predecessors, but someone who understands the Palestinian position better than any president we’ve had, someone with no natural affinity for Jews or Israel, and someone who approaches the Middle East, as he does most everything else, dispassionately and with a burning desire to fix the problem.”

As The New York Times wrote about Obama in the months leading up to the 2008 Democratic National Convention: “The secret of his transformation

[from a newcomer] to the brink of claiming the Democratic presidential nomination can be described as the politics of maximum unity. [Obama] moved from his leftist…base to more centrist circles; he forged early alliances with the good-government reform crowd only to be embraced later by the city’s all-powerful Democratic bosses; he railed against pork-barrel politics but engaged in it when needed; and he empathized with the views of the Palestinian friends before adroitly courting the city’s politically potent Jewish community.”

That courtship brought Obama the support of some of the wealthiest Jews in Chicago. They included Penny Pritzker of the Hyatt Hotel chain family; Betty Lu Saltzman, daughter of the late real-estate baron Philip Klutznik; former Congressman Abner Mikva; Lester Crown, a billionaire benefactor of Jewish charities; and Lee Rosenberg, a media and entertainment mogul, who accompanied Obama on his 2004 senatorial election campaign visit to Israel, where Obama placed a handwritten prayer for peace in the cracks of Jerusalem’s Western Wall.

Few of these early Jewish sponsors have publicly criticized the president for his tough line on Israel. But my sources tell me that at least three of his Chicago backers—Penny Pritzker, Lester Crown, and Lee Rosenberg, the recently installed president of the powerful pro-Israel lobby AIPAC (America-Israel Public Affairs Council)—have privately expressed their distress in private conversations with Obama.

Some people blame Obama’s Jewish problem on his advisers, including chief of staff Rahm Emanuel, whose Israeli father was a member of the Irgun underground during Israel’s struggle for independence; Dennis Ross, the State Departments special adviser on the Persian Gulf; George Mitchell, the president’s special envoy to the Middle East; and Valerie Jarrett, a close friend of the Obama family who attends practically all of the president’s meetings and is usually the last person to leave the Oval Office. But Richard Chesnoff, a veteran journalist who has had more than 40 years of experience reporting from the Middle East, and who’s done extensive research on Obama’s management style, doesn’t agree with that assessment.

“In my opinion,” says Chesnoff, “Obama’s problem in dealing with the Arab-Israeli conundrum doesn’t come from the advice he’s getting from his advisers, but rather in his one-man style and his inflated view of his own leadership talents. Obama believes that no matter what the odds against it, he can bring everyone togetherkumbaya style, so that we can solve hitherto insoluble problems. Perhaps even more egregiously, he seems to have an exaggerated sense of his own depth of understanding of the Middle East, which is simply not borne out by his background or experience.”

“The problem is naïveté in the Obama administration,” adds Robert Lieber, professor of government at Georgetown University. “The president came into office with the assumption that the Israel-Palestinian conflict is by far the most central urgent problem in the region—which it is not—and that it is the key that unlocks everything else in the region. And they believe the [Israeli-Palestinian] situation was ripe for progress, which it absolutely isn’t.”

By the end of March, most of the organized Jewish community was in full cry against the Obama administration’s treatment of Israel. However, the voice of New York’s senior senator, Chuck Schumer, the most influential elected Jewish official in Washington, was conspicuously silent. That gave Ed Koch, an incurable gadfly, the opportunity to taunt his frenemy Schumer in his blog, “Ed Koch Commentary.”

“Chuck Schumer resented my blog,” Koch told me. “He called me and said, ‘How can you say this? I’m a protector of Israel.’ And I said, ‘Chuck, you’re not speaking out!’ And he said, ‘I’m doing it behind the scenes.’ He was upset because there was a piece quoting me as saying, ‘It’s obvious Chuck wants to be the majority leader in the Senate if Harry Reid leaves, and Chuck doesn’t want to criticize the president and diminish his chances.’”

Throughout April, the pressure on Schumer continued to mount. Finally, when P.J. Crowley, the State Department spokesman, announced at a press conference that the relationship of Israel and the United States depended on the pace of peace negotiations, Schumer could no longer hold his tongue.

“This is terrible,” he said. “That is a dagger, because the relationship is much deeper than the disagreements on negotiations, and most Americans—Democrat, Republican, Jew, non-Jew—would feel that. So I called up Rahm Emanuel and I called up the White House and I said, ‘If you don’t retract that statement, you are going to hear from me publicly blast you on this.’

“You have to show Israel that it’s not going to be forced to do things it doesn’t want to do and can’t do,” Schumer continued. “At the same time, you have to show the Palestinians that they are not going to get their way by just sitting back and not giving in, and not recognizing that there is a state of Israel. And right now, there is a battle going on inside the administration. One side agrees with us, one side doesn’t, and we’re pushing hard to make sure the right side wins and, if not, we’ll have to take it to the next step.”

After Schumer’s J’accuse, it became clear that Obama had overplayed his hand. In part, it appeared that the president had allowed himself to be influenced by the growing volume of anti-Israel anger coming from the left wing of the Democratic Party, especially from radical students on campuses, where calls for the “delegitimization” of the Jewish State have become strictly kosher. In part, too, the president probably placed too much weight on recent sociological studies that indicate a shift in American Jewish attitudes on Israel.

This is the end of part four of a five part series. To read the entire series,  click here.