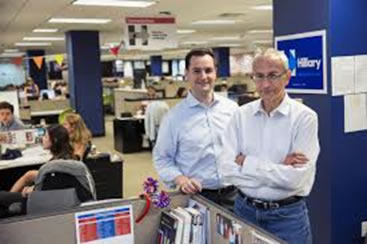 In the waning days of the presidential campaign, Bill and Hillary Clinton had a knock-down, drag-out fight about her effort to blame FBI Director James Comey for her slump in the polls and looming danger of defeat.

“I was with Bill in Little Rock when he had this shouting match with Hillary on the phone and she accused Comey for reviving the investigation into her use of a private email server and reversing her campaign’s momentum,” said one of Bill Clinton’s closest advisers.

“Bill didn’t buy the excuse that Comey would cost Hillary the election,” said the source. “As far as he was concerned, all the blame belonged to

[campaign manager Robby] Mook, [campaign chairman John] Podesta and Hillary because they displayed a tone-deaf attitude about the feeble economy and its impact on millions and millions of working-class voters.

“Bill was so red in the face during his conversation with Hillary that I worried he was going to have a heart attack. He got so angry that he threw his phone off the roof of his penthouse apartment and toward the Arkansas River.”

During the campaign, Bill Clinton felt that he was ignored by Hillary’s top advisers when he urged them to make the economy the centerpiece of her campaign. He repeatedly urged them to connect with the people who had been left behind by the revolutions in technology and globalization.

“Bill said that constantly attacking Trump for his defects made Hillary’s staff and the media happy, but that it wasn’t a message that resonated with voters, especially in the rust belt,” the source explained. “Bill always campaigned as a guy who felt your pain, but Hillary came across as someone who was pissed off at her enemy [Trump], not someone who was reaching out and trying to make life better for the white working class.”

According to the source, Bill was severely critical of Hillary’s decision to reject an invitation to address a St. Patrick’s Day event at the University of Notre Dame. Hillary’s campaign advisers nixed the idea on the ground that white Catholics were not the audience she needed to reach.

“Bill also said that many African Americans were deeply disappointed with the results of eight years of Obama,” the source continued. “Despite more and more government assistance, blacks weren’t economically any better off, and black-on-black crime was destroying their communities. He said Hillary should have gone into the South Side of Chicago and condemned the out-of-control violence.”

Though Bill conceded that FBI Director Comey’s decision to revive Hillary’s email scandal created a problem for her campaign, he believed the issue had little impact on the outcome because it had already been baked into the decisions of most voters.

“A big part of Bill’s anger toward Hillary was that he was sidelined during the entire campaign by her advisers,” said the source. “He can’t be effective if he sees himself as just another hired hand. He wasn’t listened to and that infuriated him. After all, he knows something about campaigns, and he told me in early October that Hillary and her advisers were blowing it.

“Hillary wouldn’t listen. She told Bill that his ideas were old and that he was out of touch. In the end, there was nothing he could do about it because Hillary and her people weren’t listening to anything he said.”

(This article originally appeared on MailOnline)