Toggle SlidingBar Area
Previous Next
Michelle: Hillary Is On Drugs

Michelle: Hillary Is On Drugs 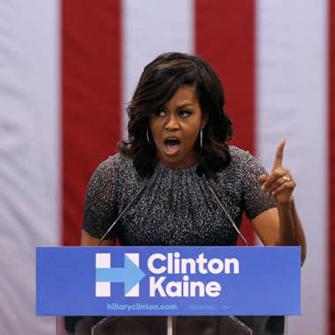 Michelle Obama, widely acknowledged as Hillary Clinton’s most effective campaign surrogate, is concerned that the Democrat presidential nominee’s health is so fragile that she depends on stimulant drugs to get her through the grueling race for the White House.

Both Michelle and Barack Obama have been concerned with the state of Hillary’s health since her presidential campaign began. The Obamas know that Hillary suffers from a slew of severe and debilitating health issues, all of which I have exposed in my latest New York Times bestseller Guilty as Sin.

According to a guest who stayed overnight in the White House and was present in the Family Residence during a discussion of Hillary’s health, Barack Obama and Valerie Jarrett, the president’s chief adviser, agreed with the first lady that Hillary has relied on booster drugs during her campaign rallies and three debates with Donald Trump.

They came to that conclusion after a recent meeting with Hillary in the White House, where Hillary made an effort to persuade the president and first lady to coordinate their public appearances with Robby Mook, the Clinton campaign manager.

When Hillary suggested that the president and the first lady submit their speeches in advance to Mook in order to make sure they were on the same page as Hillary’s campaign, Michelle Obama broke out in derisive laughter.

“Michelle made it plain that she and Barack knew how campaigns work better than Hillary or Mook,” said the source who participated in the discussion. “After all, Barack cleaned Hillary’s clock during the 2008 Democratic Party primaries.

“During the heated discussion over campaign coordination,” the source continued, “Hillary suddenly broke out in a coughing fit. The president offered Hillary a glass of water, but Hillary’s coughing only grew worse.

“The president became so alarmed that he summoned one of the five doctors who rotate on duty 24/7 in the White House Medical Unit. The doctor rushed to the Oval Office.”

While the doctor was administering to Hillary, the president, the first lady and Valerie Jarrett stepped outside and turned the Oval Office over to Hillary and the doctor. After a while, the doctor emerged and told everyone that he was able to stop Hillary’s convulsive coughing and that she was all right.

“The experience left the president and first lady shaken and worried,” said the source. “It was clear to them that Hillary was not well. They know how exhausting and draining a presidential campaign is. Clearly, the Hillary they saw in the White House was different than the Hillary the public has seen during her rallies and in the debates.

“They concluded that there was no way that Hillary could make it through such a demanding ordeal without getting some help from booster drugs.”