The Crusading Prosecutor Who Is On Hillary’s Case 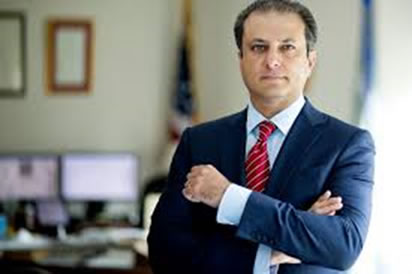 Hillary Clinton may have escaped indictment over her “extremely careless” handling of top-secret emails, but according to impeccable FBI sources, she’s not out of the legal woods yet.

According to these sources, who spoke exclusively to ED KLEIN CONFIDENTIAL, Preet Bharara, the crusading United States Attorney for the Southern District of New York, has launched an investigation to determine whether Hillary is guilty of public corruption for having used her office as secretary of state to enrich the Clinton Foundation.

Bharara is famous for bringing ironclad indictments to court. He has sent dozens of Wall Street executives, crooked cops, and powerful politicians to jail.

About a month ago, Bharara got in touch with Diego Rodriguez, the assistant director in charge of the FBI’s New York Field Office. Bharara told Rodriguez that the U.S. Attorney’s office had collected damning information from witnesses, including a former Clinton Foundation employee.

These witnesses were said to be willing to testify that Hillary granted quid-pro-quo favors to foreign businessmen and foreign governments as well as to American corporations and wealthy individuals in exchange for huge cash contributions to the foundation.

“Having Preet Bharara leading the charge on the Clinton Foundation corruption issue is very bad news for Hillary,” said the FBI source. “Most everyone in legal circles felt that Jim Comey erred on the side of caution when he failed to recommend an indictment against Hillary on email-related charges.

“But Bharara is like Inspector Javert in Les Misérables. Once he has you in his sights, he doesn’t let go. This time, Hillary may have finally met her match.”