The Myth of Hillary’s Ground Game

My new book, Guilty as Sin: Uncovering New Evidence of Corruption and How Hillary Clinton and the Democrats Derailed the FBI Investigation, is hot off the press just as Donald Trump is surging in the polls. 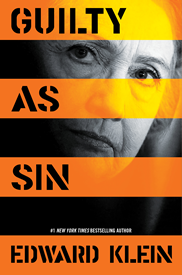 Faced with this terrifying prospect, Democrats try to console themselves with the mantra that Hillary has a better ground game—polling data and grassroots organization—than Donald.

But ED KLEIN CONFIDENTIAL recently discovered that this mantra is a myth.

We spoke to an election expert who has visited many of Hillary’s campaign offices, where he interviewed staffers and found that the Clinton operation is “chaotic.”

“There are too many people giving orders and a lot of the effort is at cross purposes,” the expert told us. “Hillary often goes around

[campaign manager Robby] Mook and other top people and starts an operation on her own. Chelsea interferes regularly, giving orders, even firing people. Huma [Abedin] also deliberately interferes with the operation.

“Bill and his people pay no attention to Brooklyn [campaign headquarters], write their own speeches, schedule travel completely without regard to the campaign organization,” the expert continued. “Bill contradicts his wife and says things that can’t be undone. Like his saying on the Charlie Rose show that she ‘frequently’ faints.

“With so many people working at such cross purpose there are often fights, loud shouting matches, with someone storming out and leaving those remaining to try to figure out what that person was working on. There have even been fist fights, and I understand that law suits have been threatened, if not yet actually filed.

“The other problem is that a lot of the interns are really Bernie [Sanders] supporters, and are only working for Hillary because she is not Donald Trump. Naturally, they watch the polls constantly, and what they see they don’t like.”

The inside story of Hillary’s campaign can be found in my new book, Guilty as Sin, which will be published October 4 and is available for pre-order on amazon.com and barnesandnoble.com.