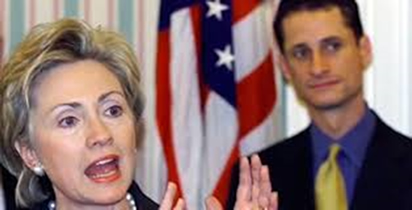 Hillary and Weiner: “I’d love to have Tony be part of my administration”, Hillary said.

When news broke that Anthony Weiner was at it again—sexting a sordid photo of himself to an unidentified woman while he was babysitting his 5-year-old son—and that his wife, Huma Abedin, Hillary’s closest aide, had finally had enough, something rang a bell.

I recalled that two years ago, in a book that I wrote titled Blood Feud, I wrestled with the strange Weiner-Abedin-Clinton triangle.

At the time, Weiner was out of a job (he had been caught sexting again) and Hillary made up for the family’s financial shortfall by setting up a lucrative sweetheart deal for Huma. She arranged for Huma to work part-time at the State Department while pulling down paychecks at the Clinton Foundation and at a company run by Doug Band, Bill Clinton’s favorite fixer.

There were stories in the media that Hillary wanted Huma to divorce Weiner. But Hillary had other ideas.

“Those stories made me look as though I was trying to force Huma to dump the father of her newborn child,” Hillary said, according to a friend. “In my eyes, the guy isn’t guilty of a crime sufficient to take his son away from him and to deprive the little boy of having an intact family. I want Huma and Tony to work out their problems, and I think they will. If I become president, I’d love Tony and Huma to be part of my administration.”

Hmm. I wonder what job Hillary had in mind for Weiner if she won the White House.