Toggle SlidingBar Area
Previous Next
Trump to Pence: “Leave Hillary to Me”

Trump to Pence: “Leave Hillary to Me” 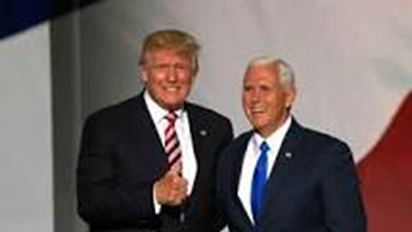 Trump and Pence: A complementary team

Despite the rocky start to the Democratic National Convention, bookies are making the Hillary-Kaine ticket the odds-on favorite over the Trump-Pence ticket.

But the smart money may be as wrong about the U.S. presidential election as it was about Britain’s referendum on the European Union, in which the bookies gave the Remain camp an 82 percent chance of victory.

Mike Pence is a favorite among evangelicals and other conservatives, and he can do Trump a world of good in turning out the Republican base on Election Day.

Still, when Trump approached Pence about becoming his running mate, the Indiana governor didn’t jump at the chance. In fact, he expressed some reservations about whether he was Trump’s ideal choice for the number-two spot.

According to my sources, Pence told Trump: “There’s something you ought to know about me. Traditionally, the running mate is assigned the job of attacking the presidential nominee of the other party. But I took a pledge back in 1991—you might call it a conversion—that negative campaigning is wrong. So, I’m not going to go negative on Hillary. Do you still want me as your vice president?”

And again according to my sources, Trump looked at Pence and said with Trumpian relish: “Don’t worry—leave Hillary to me.”

So the bookies better take another look at the race, for if anyone can stop Hillary, it’s Donald Trump.