Her previous books have failed to earn back their publishing advances, but Hillary Clinton is such a darling of the liberal publishing world that she received several million dollars for her new book, What Happened, which will be published a week from today.

It was a bad investment.

The worst thing that can happen to a serious book is that it arouses universal laughter and ridicule. And that’s what happened to What Happened.

In the book, Hillary blames everyone but herself for her election loss. This is such nonsense that humorists of all political stripes had a field day making fun of the book

The New Yorker, normally a safe haven for Clintonian groupthink, damned Hillary’s book with faint praise in its “Daily Shouts” column—a collection of fictional blurbs in “advance praise” for What Happened.

My favorite blurb is the following:

“I purchased this book, but I do think it is morally bereft and evil. I guess if I were to compare it to, like, ‘Lolita,’ a book about someone who lusts after his own step-daughter, it’s not as bad. In fact, I’d argue that this book is the lesser of two evils, if only because this book never describes at length the desire to look at underage girls undressing. But I can confidently say that is the only difference.” 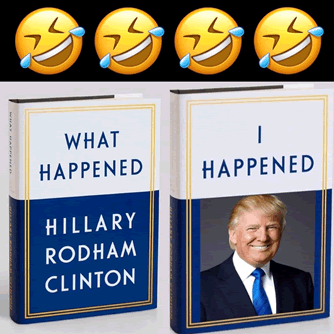 With all its pre-pub publicity, What Happened debuted as No. 1 on the Amazon Top 100 Books list, then immediately slipped to No. 8.

Sales of the book weren’t helped when the media reported that Hillary was going to charge big bucks to hear her speak on her book tour of the United States and Canada.

“This pay-for-access has all the political wisdom of doing another round of private speeches for Goldman Sachs,” a publishing industry source told Fox News, “but as her book tour makes clear, at this point in her career all she cares about is cashing in.”