Huffington Post: The Jewish Problem With Obama – Part 2 of 5 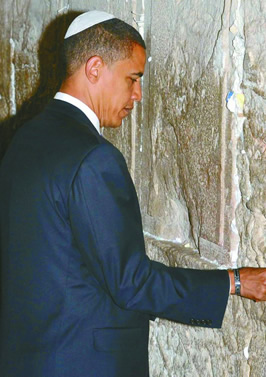 The Jewish problem with Obama can be traced back to his first full day on the job. On January 21, 2009, he summoned his national security team to the Oval Office and laid out a tough new policy toward Israel. According to our sources, Obama said that in order to make good on his campaign promise to extricate 200,000 American troops from the wars in Iraq and Afghanistan, the U.S. had to create a grand coalition of “moderate” Muslim states and Israel to isolate Iran, which has made no secret of its ambition to become the nuclear hegemon in the Middle East.

The only way to accomplish that goal, the president stated, was to eliminate the poisonous effect of the Israeli-Palestinian conflict, which provides Iran with an excuse to stir up trouble. Thus it was “a vital national interest of the United States” to stop Israel from building settlements in the occupied West Bank and housing in East Jerusalem, and force the Jewish state to resolve the Palestinian problem.

Previous White Houses had made similar noises about bringing peace to the Middle East, and at first Jewish leaders didn’t pay much attention to leaks emanating from the new administration about a fundamental change in American policy. However, a clue to the president’s true intentions came in March 2009, when Abe Foxman, the national director of the Anti-Defamation League, met with the president’s then chief of staff, Rahm Emanuel.

“This is Israel’s moment of truth,” Emanuel told Foxman. “This President is determined to make peace between Israel and the Arabs.”

To many Jews, it seemed highly improbable that a brand new president would choose to alienate Israel, America’s oldest and most loyal ally in the Middle East. But then, in July 2009, when President Obama made his first overseas trip, he chose to visit three Muslim countries–Turkey, Saudi Arabia and Egypt. During a landmark speech in Cairo, he announced his intention to seek “a new beginning between the United States and Muslims around the world.”

Understandably enough, American Jews were annoyed that the president had failed to include Israel in his Mideast swing. But what rankled them even more was that Obama seemed to adopt the Arab narrative to explain the existence of Israel–namely, that Israel deserved to exist because of past Jewish suffering in Europe, particularly during the Holocaust. Nowhere in his Cairo speech did Obama mention the fact that Jews had a 3,000-year history in the Promised Land.

Things went from bad to worse when the president called a meeting of Jewish leaders in July. Fourteen major Jewish organizations were represented at this meeting, including J Street, the newly formed left-of-center Jewish lobby. J Street is on the same wavelength as the Peace Now movement in Israel, which believes that continued occupation of the West Bank harms Israel both economically and politically and damages the values and fabric of the Jewish state.

“I agree with your goal to bring peace to the Middle East,” the ADL’s Abe Foxman told the president. “But the perception is that you’re beating up only on Israel, and not on the Arabs. If you want Israel to take risks for peace, the best way is to make Israel feel that its staunch friend America is behind it.”

“You are absolutely wrong,” the president replied. “For the past eight years

[under the Bush administration], Israel had a friend in the United States and it didn’t make peace.”

“I came away from the meeting convinced that Obama has introduced a new and dangerous strategy and that it’s revealing itself in steps,” Foxman told Edward Klein. “Unlike other administrations, this one is applying linkage in the Middle East. It’s saying that if you resolve the Israeli-Palestinian conflict, the messiah will come and the lions will lie down with the lambs. All the president’s advisers on the Middle East, starting with George Mitchell, believe in linkage, and they’re telling the president you have to prove to the Arab Muslim world that you are different than previous presidents and you can separate yourself from Israel, distance yourself from the settlements issue. After all, settlements are something that American Jews don’t like anyway, so it’s a win-win proposition.”

The Anti-Defamation League was the first mainstream Jewish organization to openly criticize the president on the issue of the Middle East. Soon, other groups began to join the chorus. However, the great majority of Jews remained steadfast behind Obama and his administration’s liberal agenda. They simply were not ready to criticize their country’s first African-American president, a man in whom they had invested so many of their own hopes and dreams.

This is the end of part two of a five part series. To read the entire series,  click here.