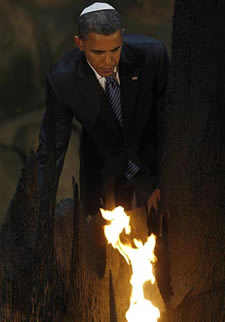 “The majority of today’s American Jews don’t see themselves as outsiders or victims anymore,” says Binyamin Jolkovsky, the publisher and editor of the widely read Internet magazine JewishWorldReview.com “That’s positive. But that feeling of equality has also produced a communal negative. The fear that came with being an outsider also gave most Jews, even non-religious ones, a cohesive sense of responsibility regarding their Jewish identity in general and Israel in particular.

“That’s changed,” Jolkovsky continues. “I’m no senior citizen, but today’s generation didn’t witness the Holocaust, they don’t understand what was entailed in the birth of Israel, they don’t even remember the real threats of the 1967 Six Day War, they probably never read the novel Exodus. The majority of young American Jews think that somehow Israel will always be there. They don’t understand that when your enemies say they want to destroy you, they mean it.”

Most of all, what Obama didn’t count on was that, for all the changes taking place among younger “progressive” Jews, Jerusalem remains a third rail in American politics. The person who seemed to understand that better than any one else was Elie Wiesel, the Nobel Laureate and Holocaust survivor, who took out full-page ads on April 16 in major American newspapers to express his views on the city of Jerusalem.

“For me, the Jew that I am, Jerusalem is above politics,” Weisel wrote. “It is mentioned more than six hundred times in Scripture — and not a single time in the Koran. Its presence in Jewish history is overwhelming. There is no more moving prayer in Jewish history than the one expressing our yearning to return to Jerusalem. To many theologians, it IS Jewish history, to many poets, a source of inspiration. It belongs to the Jewish people and is much more than a city; it is what binds one Jew to another in a way that remains hard to explain. When a Jew visits Jerusalem for the first time, it is not the first time; it is a homecoming.”

Klein interviewed Weisel following a private lunch that he had in early May with President Obama at the White House. “The invitation came before my public statements on Jerusalem,” Weisel said. “It was a very good lunch. No small talk. Everything was substance. I understood his position. We didn’t agree on everything. The president wanted to know why Bibi

[Prime Minister Benjamin Netanyahu] didn’t fire the minister who made that Jerusalem announcement. I said he would have had to go to his party and say, ‘Give me anyone else.’ But he didn’t and then there was a chain reaction.

“Most of the problems [between America and Israel] remain, but the intensity on both sides and the recriminations are gone,” Weisel added. “During our lunch, it was clear that the President does at least know that Jerusalem is the center of Jewish history, and he knows you can’t ignore 3,000 to 4,000 years of history. I believe the only way to attain peace is to put Jerusalem at the end of the negotiations, not at the beginning.”

By this summer, with the fall midterm elections looming ever larger in the calculations of the White House, the Obama administration seemed to soften some of its more controversial Mideast policy initiatives. For instance, on Jerusalem, the White House conceded that the question of the city’s status should now come at the end of negotiations between Israel and the Palestinians, as Elie Weisel desired, rather than at the beginning, as the president originally wanted.

Along with this apparent U-turn in substance, the White House launched a charm offensive to win back the allegiance of the Jewish community. The president set the tone. He sent a personal letter to Alan Solow, chairman of the Conference of Presidents of Major Jewish Organizations, in which he reasserted his support for Israel’s security. And he followed that up with a warm message of greeting on the occasion of Israel’s 62nd independence day.

Meanwhile, pro-Obama rabbis from local communities all over America were invited to the White House for schmooze fests with Rahm Emanuel, Daniel Shapiro, the deputy national security adviser who deals with the Middle East, and Dennis Ross, the White House’s top Iran policy official.

“The three men told the Democratic rabbis that the administration has three priorities in the Middle East,” Caroline Glick reported in The Jerusalem Post. “First Obama seeks to isolate Iran. Second, he seeks to significantly reduce the U.S. military presence in the Middle East, particularly in Iraq. And third, he seeks to resolve the Palestinian conflict with Israel.”

As part of its PR campaign, the White House had David Axelrod do a limited mea culpa hangout. “With some of the leadership of the Jewish community there’s been some bumps in the road over the past 15 months,” Axelrod admitted in a phone conversation. “Some of those bumps resulted purely from a lack of communication on our part. I don’t think we’ve done as good a job as we could have in our communications with the Jewish community during the first year or so of the administration. We’ve had a sustained and vigorous round of communications in the last few months, and I think that’s been helpful.”

The crowning moment in Washington’s charm offensive came in July, when Prime Minister Netanyahu returned to Washington and this time was given the red-carpet treatment. He was honored with a working lunch in the Cabinet Room and a joint press conference with Obama. And there were plenty of opportunities for photos. Following that, in September Obama sponsored direct talks between Israelis and Palestinians–talks that could conceivably meet with some success or simply come to a harsh halt.

But neither the White House’s charm offensive nor the minor adjustments that it has made in its policies could obscure an irrefutable fact: those changes have been tactical and tonal, not substantive. Indeed, the essential ingredients of the Obama administration’s Mideast policy have not changed. The goal is still the same–to conclude successful peace talks by applying pressure on Israel.

“In my view, the Obama administration has not pulled back from its desire to ingratiate itself with the Arab world,” says Kenneth J. Bialkin, chairman of the American-Israel Friendship League. “Yes, they’ve pulled back from saying that Israel’s conduct endangers the lives of American soldiers in the Middle East. But most of its charm offensive was aimed at damage control in order to salvage the Jewish vote this fall.”

Domestic politics surely played a role in the president’s calculations vis-à-vis the American Jewish community. But in the long run, realpolitik–a system of international relations based on practical rather than moral considerations–will determine Obama’s approach to Israel. The major foreign policy question confronting Obama is how to extricate America from the morass of two wars in the Middle East. And the unpleasant truth is that, in pursuit of that goal, Obama has a diminishing need for Israel.

The major foreign policy question confronting Obama is how to extricate America from its military morass in the Middle East. And in pursuit of that goal, Obama expects Israel to strike a peace accord with the Palestinians and their Arab allies–no matter how real or unreal that expectation may be.

“Obama and his people believe the Palestinian leadership is genuinely ready for historic compromise,” says David Horovitz, the London-born editor of The Jerusalem Post. “The unfortunate consensus in Israel–and not just the hawks–is that while we wish [the Arabs] were [ready], they aren’t…. [T]o our great sorrow–and to our great cost–we are not convinced that even the relative moderates like Abbas and Prime Minister Fayyad have internalized the idea that Jews have historic rights here too.”

Indeed, in the days just before the new peace talks began, Palestinian leaders went out of their way to declare that while they might be prepared to negotiate with Israel, they would never recognize the legitimacy of a Jewish state in the Middle East–namely, Israel’s very raison d’etre. In other words, nothing fundamental has changed in the Arab approach to Israel’s right to exist since the creation of the State of Israel 62 years ago.

Thus, whether the Israelis, the American Jews and the other supporters of the Jewish state like it or not, the harsh truth is that during the second half of Barack Obama’s first term in office, the president’s refusal to face reality in the Middle East is likely to shape American policy.

Be First to Know.

To be informed and ahead of the news, sign up FREE for ED KLEIN CONFIDENTIAL!