THE CLINTONS AND THE OBAMAS…IT’S MORE THAN A POLITICAL RIVALRY, IT’S A BLOOD FEUD 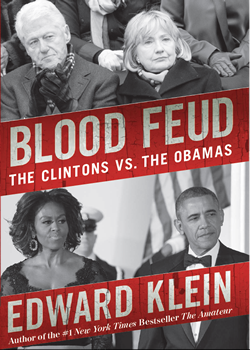 They are allies by circumstance, rivals in fact, and enemies by personal animosity. New York Times bestselling author Edward Klein pulls back the veil on the most unreported story in Washington— the jealousy and antipathy that divide the two most powerful Democratic families in the country.

With unparalleled reporting and access to the most sensitive sources close to the principals, Klein gives an insider’s, behind-the-scenes view of the mutual loathing between the Democratic standardbearers. Blood Feud reveals:

Jaw-dropping in its revelations, compulsively readable in the famous Klein style, Blood Feud will be the most talked about political book of the year.