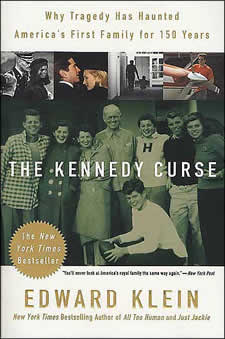 Death was merciful to Jacqueline Kennedy Onassis, for it spared her a parent’s worst nightmare: the loss of a child. But if Jackie had lived to see her son, JFK Jr., perish in a plane crash on his way to his cousin’s wedding, she would have been doubly horrified by the familiar pattern in the tragedy. Once again, on a day that should have been full of joy and celebration, America’s first family was struck by the Kennedy Curse.

In this probing expose, renowned Kennedy biographer Edward Klein-a bestselling author and journalist personally acquainted with many members of the Kennedy family-unravels one of the great mysteries of our time and explains why the Kennedys have been subjected to such a mind-boggling chain of calamities.

Drawing upon scores of interviews with people who have never spoken out before, troves of private documents, archives in Ireland and America, and private conversations with Jackie, Klein explores the underlying pattern that governs the Kennedy Curse.

The reader is treated to penetrating portraits of the Irish immigrant Patrick Kennedy; Rose Kennedy’s father, “Honey Fitz”; the dynasty’s founding father Joe Kennedy and his ill-fated daughter Kathleen, President Kennedy, accused rapist William Kennedy Smith, and the star-crossed lovers, JFK Jr. and Carolyn Bessette. Each of the seven profiles demonstrates the basic premise of this book: The Kennedy Curse is the result of the destructive collision between the Kennedy’s fantasy of omnipotence-an unremitting desire to get away with things that others cannot-and the cold, hard realities of life.