Think you know the real Barack Obama? You don’t—not until you’ve read The Amateur 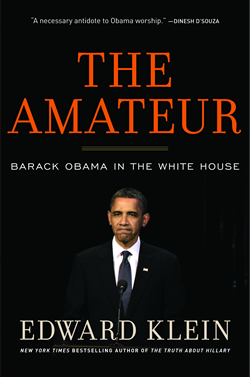 In this stunning exposé, bestselling author Edward Klein—a contributing editor to Vanity Fair, former foreign editor of Newsweek, and former editor-in-chief of the New York Times Magazine—pulls back the curtain on one of the most secretive White Houses in history. He reveals a callow, thin-skinned, arrogant president with messianic dreams of grandeur supported by a cast of true-believers, all of them united by leftist politics and an amateurish understanding of executive leadership.

In The Amateur you’ll discover:

Praise for The Amateur

“The Amateur is the best book I’ve read on how Barack Obama is wrecking our country. I urge everyone who cares about America to read Edward Klein’s eye-opening book.”

—Donald J. Trump, world-famous businessman, owner and host of the hit NBC TV shows The Apprentice and Celebrity Apprentice, and bestselling author of many titles, including Time to Get Tough: Making America #1 Again

“This is a racy, entertaining, informative book that illuminates aspects of Obama and his team that have not been previously reported. A necessary antidote to the Obama worship that is sure to characterize the election debate.”

—Dinesh D’Souza, president of The King’s College and bestselling author of The Roots of Obama’s Rage

“All the horrors I predicted in Welcome to Obamaland have now been definitively proven true by Edward Klein’s rip-roaringly readable new book The Amateur, which uses great stories and great reporting to illustrate just how ideological, arrogant, and hapless Obama and his administration really are. An outstanding demolition job on the most overrated president of our time.”

—James Delingpole, columnist for the Daily Telegraph and the Spectator and author of Welcome to Obamaland

“A devastating indictment of the lethal combination of incompetence and radicalism that has made Obama into one of the worst presidents in American history.”

—Norman Podhoretz, former editor of Commentary magazine and author of many books, including most recently, Why Are Jews Liberals?