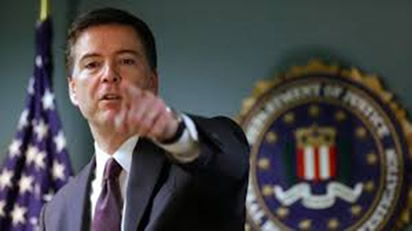 A month has passed since FBI Director James Comey ripped into Hillary Clinton for the “extremely careless” way she handled classified emails while she was secretary of state, but stopped short of recommending that criminal charges be brought against her.

However, that doesn’t mean Hillary is out of the FBI woods.

According to a source close to Comey, Hillary is still the target of an active FBI criminal investigation, but this time around, the media aren’t paying much attention.

With little public fanfare, Comey’s agents have been looking into Hillary’s relationship with foreign businessmen and governments who donated millions of dollars to the Clinton Foundation and are suspected of having received favors from the secretary of state in return.

Such pay-to-play behavior falls under the category of “public corruption,” and Comey’s agents are trying to determine whether Hillary conducted a series of secret meetings with foreigner donors separate from her duties as secretary of state.

Several people interviewed by the FBI have confirmed that Hillary did just that on numerous occasions while she was at the State Department.

“There are a sizable number of agents on this case,” said the source. “I don’t know exactly how many. It’s fewer than were assigned to the email case, but it’s still dozens of agents. By any measure, it’s a major investigation.

“Comey is taking every precaution against leaks while the investigation is ongoing. He’s ordered all the agents on the case to sign nondisclosure agreements and submit to random lie detector tests.

“While this public-corruption investigation is going on, the FBI is also looking into new information that, as a result of Hillary’s carelessness, hostile states like Iran hacked into her email system and compromised U.S. intelligence sources and personnel.

“Hillary shouldn’t imagine that she’s free and clear. Comey may have pulled his punches the last time around because he didn’t think his case was winnable in a court of law, but it’s possible that new evidence could shock the country and make Hillary a very vulnerable presidential candidate.”