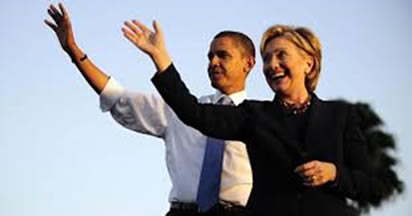 Hillary Clinton has turned down repeated requests by Barack Obama to join him in a nationwide political movement that he plans to lead against the presidency of Donald Trump.

[Jarrett],” said a source familiar with Hillary’s conversations with the outgoing president and his chief political adviser. “They’ve been urging Hillary to get on board their anti-Trump campaign.

“They invited her to a post-Inaugural Day gathering at the mansion the Obamas have rented in D.C., where they’re going to lay the groundwork for the offensive against Trump,” the source added. “Among those on the invitation list: Donna Brazile, Nancy Pelosi, and James Carville. But Hillary told Obama and Valerie that she couldn’t work it into her schedule.”

According to the source, Hillary doesn’t have much faith in Obama’s leadership of an anti-Trump crusade.

“Obama’s proved time and again that he thinks only of himself, not of his fellow Democrats,” said the source. “He’s been a lousy leader of the Democratic Party and, after eight years in the White House, he’s left the party in shambles.

“There’s yet another reason Hillary doesn’t want to be associated with an Obama-led movement against Trump,” the source added. “Trump has indicated he’s willing to let bygones be bygones as far as Hillary’s email scandal and her pay-to-play involvement with the Clinton Foundation. She doesn’t see any upside to pissing off Donald as he moves into the White House.”