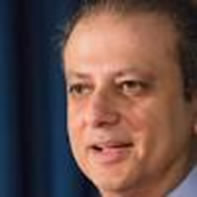 By refusing to resign and forcing the Trump administration to fire him, Preet Bharara, the celebrated U.S. attorney for the Southern District of New York, has shrewdly positioned himself a new force in Democratic Party politics.

Known as “the Sheriff of Wall Street” for his high-profile convictions of inside traders, Bharara follows in the tradition of two of his most ambitious prosecutorial predecessors: Thomas Dewey, who gained notoriety—and his party’s 1944 and 1948 presidential nominations—by going after gangsters like Dutch Schultz and Lucky Luciano; and Rudy Giuliani, who became nationally famous in the 1980s—and later New York’s mayor—by bagging Wall Street icons like Ivan Boesky and Michael Milken.

Bharara is a Democrat, and as Mel Brooks might say, it’s good to be a Democrat in New York City. Hillary Clinton captured a whopping 79 percent of the city’s vote in 2016.

What’s more, if you have political ambitions in New York City, you can’t ask for a better testimonial than having been fired by the Republican administration of Donald Trump.

Bharara also happens to be a Chuck Schumer Democrat; he served as Schumer’s chief counsel for several years before Obama nominated him in 2009 as the U.S. attorney for the Southern District.

If Bharara has caught the political bug, he could count on the backing of Schumer, who is one of the most prolific fundraisers in the Democratic Party.

So the question is: Will Bharara challenge his fellow Democrat, New York City Mayor Bill de Blasio, who is the target of five separate criminal investigations?

Several political insiders tell me that the answer to that question depends on whether de Blasio avoids indictment.

Others point out that even if de Blasio skates, it’s unlikely that all the members of his inner circle and major fundraisers will walk away scot-free.

In that case, the way would be clear for Bharara to run in the Democratic Party primary against de Blasio as the candidate who will drain the city’s swamp.