Toggle SlidingBar Area
Previous Next
Let’s Call It What It Is: Radical Liberalism

Let’s Call It What It Is: Radical Liberalism 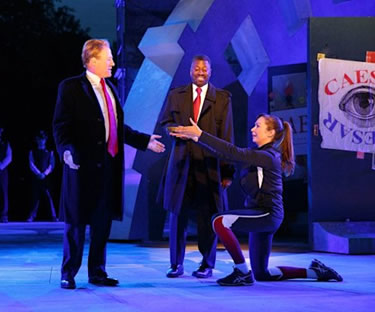 Donald Trump a.k.a. Julius Caesar in Shakespeare in the Park

I’m no great fan of “American Psycho” novelist Bret Easton Ellis, but I felt a twinge of empathy for him when I read his recent tweet about dinner with the Hollywood liberal establishment.

“Another dinner ruined,” he complained. “People are crazy. Get a grip.”

I know whereof he speaks.

Liberals have come up to me in restaurants in New York City and harangued me about my books critical of Hillary Clinton and Barack Obama.

There’s no reasoning with them.

Liberals used to belong to the party of tolerance and open-minded discussion.

Now, they riot against free speech at Berkeley—the home of the free speech movement—and curse White House Press Secretary Sean Spicer when he goes shopping at an Apple store.

“How does it feel to work for a fascist?” a woman shouted at Spicer. “Have you helped with the Russia stuff? Are you a criminal as well? Have you committed treason too, just like the president?”

Take, for example, the depiction of President Trump’s murder in the recent Shakespeare in the Park production of “Julius Caesar.”

Or Stephen Colbert’s revolting comment about Trump engaging in a sex act with Putin.

Liberals like to say they are on the side of truth and goodness, and that the rest of us are wicked and evil. This is not a political argument; it’s the argument of people engaged in a religious war in which only one side can emerge victorious.

In that regard, it resembles radical Islam. It’s time we started talking about radical liberalism