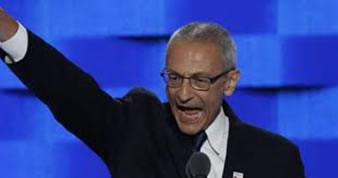 Sounding off: Is it Podesta or his Evil Twin Skippy?

John Podesta, the chairman of Hillary Clinton’s losing presidential campaign, is notorious for his hot temper. When he blows his fuse, people in Washington say he turns into his Evil Twin Skippy.

Skippy surfaced the other day.

In an interview with Politico, he dumped all over Donald Trump. He called the president “absolutely crazy,” and “incapable of doing his job.”

Trump, he said, is worse than Nixon. “Nixon, for all his flaws…was serious.”

Skippy is like most Democrats. They can’t stand the idea that Donald Trump is in the White House. It drives them crazy and warps their judgment.

When Skippy sounded off the other day, it reminded us that the Democrats have an alter ego, too— their Evil Twin Dippy.

The only thing Dippy has going for itself is the hope that Trump will be impeached.

But for that to happen, Dippy has to take back control of the House of Representatives in the 2018 midterm elections.

According to the Constitution, the House initiates impeachment proceedings.

Until then, Dippy will continue banging on Trump, coming up with conspiracy theories, obstructing Trump’s political agenda, and acting in an asinine and harebrained way.