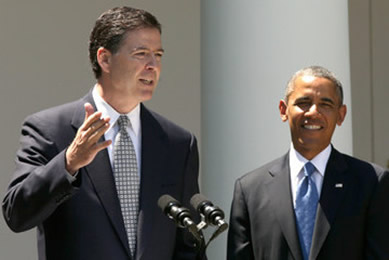 Comey with the president who appointed him FBI director

The media has been holding its breath waiting to hear if James Comey, the recently fired FBI director, will talk about his private conversations with President Trump when he testifies before the Senate Intelligence Committee this week.

Did Trump ask for Comey’s “loyalty” if he kept him on as FBI director?

Did Trump get Comey alone and ask him to back off the investigation of former national security adviser Mike Flynn?

Did that rise to the level of obstruction of justice?

Given all this interest, I thought I would share with my readers an interview with one of Comey’s closest friends regarding pressure brought to bear on the FBI director from a president—in this case, the president being Barack Obama.

It turns out that the Obama White House contacted Comey in early June 2016 and invited him to have a beer with the president on the White House lawn.

“When Jim’s appointments secretary read him the message, he told me he was taken by complete surprise,” Comey’s friend said. “The request wasn’t proper, and Jim told his secretary to tell the White House he was too busy to have a casual beer with the president.

“Jim didn’t think more about it for a few weeks, until the president himself called. Obama was his charming self and made small talk and said he’d like to have a one-on-one basketball game with Jim. He said he’d heard that Jim had a hoop at home.

“Jim is a lifelong cop and prosecutor and his mind always goes to motive. What did the president really want to talk about? Jim suspected that Obama wanted to put pressure on him regarding the investigation of Hillary’s private email server.

“Jim told Obama that he’d love to have a one-on-one with him, but he begged off saying his schedule was a killer and he couldn’t justify taking the time away from his job.

“Jim told me that Obama sounded really annoyed. He was surprised that Obama—Mr. Cool—had stepped over the line.”