Toggle SlidingBar Area
Previous Next
When Comey Did Obama’s Bidding

When Comey Did Obama’s Bidding 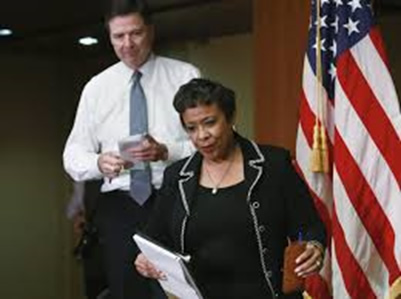 Several people have asked me if I was shocked when James Comey, the former FBI director, admitted under oath that his boss, Attorney General Loretta Lynch, ordered him to call the investigation of Hillary’s use of a private e-mail server “a matter”—which was how the Clinton campaign characterized it— rather than what it actually was, “a criminal investigation.”

Was I shocked that Comey agreed to Lynch’s language, using the excuse, “This isn’t a hill worth dying on, and so I just said, ‘OK’?

I wasn’t shocked about that, either.

The truth is, the fix was in on the Hillary investigation from the start. President Obama, you will recall, did his best to defend Hillary and her indefensible use of an unsecure and easily hackable e-mail system.

“This,” Obama told 60 Minutes’ Steve Kroft at the very beginning of the investigation, “is not a situation in which America’s national security was endangered.”

After that remark, Comey asked to meet with Obama. This wasn’t their first meeting; they had had dinner several months before. Apparently, Comey developed an aversion to meeting with a president only after Donald Trump moved into the White House.

In addition, Loretta Lynch paid visits to the White House to brief Valerie Jarrett, Obama’s consigliere, about the status of the investigation. It was Jarrett, acting on behalf of Obama, who urged Lynch to order Comey to call the investigation “a matter.”

The meeting between Comey and Obama didn’t go well.

“Comey and Obama held each other in contempt,” I wrote in my book, Guilty As Sin. “Comey complained to his top assistants that…the president treated him with a tone of condescension. To Obama, the FBI was like any other cop shop, not the premier law enforcement organization in the country.”

Comey was more worried about appearances than he was about substance. He didn’t want it to appear that the White House was pressuring him to let Hillary go free.

But that is exactly what Obama, Jarrett, and Lynch did.

And we all know how that turned out.

Though Comey found Hillary “extremely careless in the handling of classified information,” he did his bosses’ bidding and refused to press charges against her