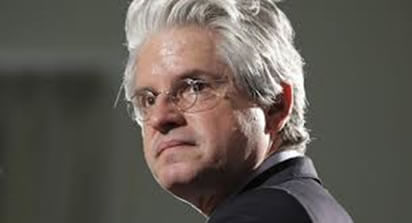 Brock accused Bernie Sanders of not caring about black people.

Brock squawked that a Sanders campaign’s ad, which showed the candidate at a mostly white rally, proved that “black lives don’t matter much to Bernie Sanders.”

Sanders was naturally outraged and he ordered one of his spokesmen to fire back. Hillary, said the spokesman, “should be ashamed of her association with Brock.”

And indeed, if Hillary weren’t totally shameless, she would be ashamed.

While Hillary was still in college, holding rallies in favor of dormitory visits by boys, Sanders was marching for black civil rights in the South.

Truth has never gotten in Brock’s way. He has been compared to Joseph Goebbels, Hitler’s Reich Minister of Propaganda. Like Goebbels, Brock relishes telling the Big Lie.

He does so through his dishonest and discredited leftwing spin operation, Media Matters, and his pro-Hillary super PAC, Correct the Record, which columnist Maureen Dowd has dubbed “the Clinton Slime Room.”

No one likes Brock. If Hillary is unlikeable (as I’ve written), most people say they find Brock downright detestable.

Even members of Hillary’s campaign team can’t stand him. Back in February 2015, they frog-marched Brock out of USA Action, the pro-Hillary super PAC.

Despite all this, Hillary remains close to Brock. Which reminds me of that old saying: “Show me who your friends are and I’ll tell you who you are.”

David Brock tells you all you need to know about Hillary Clinton.